( Hi friends!  Here is the first Bible Study of our Twenty-Two Month Walk through the Bible journey together!  I would love your feedback!  Study questions follow at the end of the lesson.  Just post answers or comments in the comment section or meet online at our Facebook page: www.facebook.com/LoveCameDownBibleJourney

So glad you have joined me on this adventure of encountering God in His Word from Genesis to Revelations!  Tell all your friends!  The more, the merrier!

In the beginning, God.

Scripture records that from the start, from reshiyth[i], God was there. With these first four words, “in the beginning God”, we too, begin.   Like the little child who asks, “Who made God?” we breathe in those four first words deep and answer bravely with more than muster, “God. He created everything”.

With this understanding, we encounter creation, one scene at a time, like an avid movie buff seated comfortably as the credits roll on with only one name for every part:  God.

In the beginning God created the heavens and the earth. The earth was without form, and void; and darkness was on the face of the deep. And the Spirit of God was hovering over the face of the waters. (Gen 1:1-2, NKJV[ii])

In the beginning, God hovered over our formless, void, dark earth. Hover, “rachap[iii]” in Hebrew, gives the sense of a mother bird brooding upon her nest, patiently waiting with intentional warmth upon the dark chaos. Yet this is no mama bird flitting across the ocean like scenes watched on Discovery.  This is God, “Ruach Elohim[iv]”, the breath of God hovering upon the deep fathomless abyss.  Scofield describes Elohim as “El”meaning”strength” or “the strong one” and “Alah”..”to swear”, “to bind oneself by an oath” implying “faithfulness”[v] . The divine essence, the Spirit of God, the God of strength and constancy, patiently brooded upon the darkness, His divine breath hovering above empty earth’s chaos.

Then God spoke. “God said, “Let there be light” and there was light. And God saw the light that it was good; and God divided the light from the darkness.”(Gen 1:3-4)

Cue the sound effects.  Can you hear the rumbling thundering Voice upon the waters?  Can you feel the stirring of Light, the energy, the power of God moving upon the face of the deep?  Can you grasp the authority of those first emphatic words, when God of all time, space and place decreed “Let there be light.”?

Gen 1:5 states “God called the light Day, and the darkness He called Night. So the evening and the morning were the first day.”

That’s the beginning point, time given, a gift for us all.

I remember gasping for breath at twenty-two, floundering in my inabilities, a single mom struggling to make sense of life and ending up bitter confused.  Empty, void, in utter darkness, I lived poor and blind. I did not count my days, let alone live them in God’s embrace.

I remember the day God found me, unshapen, confused, dark and proud. Mercy cracked light into my darkened thoughts, and warmth flowed into my wizened heart when a compassionate daycare provider reached out and mothered this mother, feeding me at her table, encouraging me with Jesus, until tentatively, I reached up through my painful dark to His Light.

The scene cuts away to Day Two.  God divided the waters and firmed up the heavens on the second day, a feat too mysterious and awesome for my brain to grasp, yet it happened.  I remember that stunned moment when I stumbled to an altar, sobbing out my sorrow and shame, and He met me with enough love to change everything.  Light invaded and my drowning ceased as I became alive finally to the One who loved me.  As He washed me clean, I can still feel that extraordinary firming inside, as if I emerged from a deep place of captivity and stepped into a new life upon firm shores.  Perhaps that second day, the heavens groaned with similar relief as definition and space emerged by God’s kind hand.

On the Third Day, breathless, we watch as God gathers the waters into seas and dry land emerges on the third day. 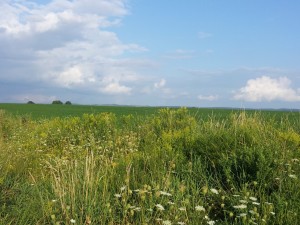 We gaze amazed as grass and trees and seed first appear at His command. Think about the potential of juicy apples, mangoes, pineapples and banana trees.  Consider the joy of those first tart juicy raspberry bushes without the prickles.  Don’t you long to walk barefoot on that plush soft grass without a hint of crab weed or dandelions?  Just try to smell the blossoms filling the meadows and inhale the sweet perfume of fresh sweet grass in that perfect climate.

By Day Four, God establishes the sun, the moon, and the stars as light for heaven and earth.  He distinguishes two great lights for time and places, seasons, days and years, and for signs as further markings of time are released into creation. Orbits, planets, constellations, all were written into code on this day.  God’s Word translation says in Ps 33:6 “The heavens were made by the word of the LORD and all the stars by the breath of his mouth”. It must have been awesome, as God painted the heavens with constellations, establishing His signs to man in the heavens, imprinting art and science with His design, as clues for encounter with man.  And God said it was good.

On the Fifth Day, God commanded the waters to bring forth abundantly the living creatures. It says He made great whales and He filled the sky with birds, bright and saucy in yellows and golds and emeralds and sapphires as happy sound pierced the heavens with birdsong. God soaked it all in, grinned and said it was good.

Now the scene unfolds with the Sixth Day. Childhood memories of animals streaming into Noah’s Ark are but a fraction of this noisy melee as animal life filled the earth:

Everything was ready:  the earth, the heavens, the land and the sea, the stars, the sun and the moon, the plants, the trees, the fish, the birds and all the living creatures.  In a great climax of creation, God offers a great idea:

Then God said, “Let Us make man in Our image, according to Our likeness; let them have dominion over the fish of the sea, over the birds of the air, and over the cattle, over all the earth and over every creeping thing that creeps on the earth.” So God created man in His own image; in the image of God He created him; male and female He created them. (Gen 1:26-27).

In Gen 2:7, we are brought in close to this tender scene: “And the LORD God formed man of the dust of the ground, and breathed into his nostrils the breath of life; and man became a living being”. Can you see God, perhaps humming a merry tune in harmony to the birds He had just created, as He bent down to earth, scooped the soil and then, oh so tenderly, fashioned that first Adam and then Eve, into the marvel we call the human race? I catch my breath each time I think of His lips, His very breath, blowing softly upon earthen lips, and then, life began.

Love came down for us all.

Then God blessed them, and God said to them, “Be fruitful and multiply; fill the earth and subdue it; have dominion over the fish of the sea, over the birds of the air, and over every living thing that moves on the earth (Gen 1:27).

From emptiness and deep darkness to definition and purpose, earth emerges now as Man’s turf.  They are created, blessed and given a mandate of dominion.  Love stepped from the infinite to finite and brought light to our darkness. Now humanity is tenderly formed, placed in a lush garden, Eden, and invited to daily walks with God through His creation.

Yet, I bet you know the rest of the scene, don’t you? Where that wicked serpent tempts Eve to believe God is holding out on her? When Adam stands there, the strong silent one who eats the fruit and still blames Eve?

Do you cringe with pain when God calls out “Adam, where are you, as I do?” Do you weep as animals are slain to clothe God’s kids? Do you wail as the first of all humanity are turfed out of Eden, and God has to guard the very garden He just made, setting cherubim and a flashing sword between man and eternity,  lest they become immortal in their sin?

Let me share with you a back story that changes the story more certainly than Bilbo Baggins holding the Ring in a horde of Orcs:

In the New Testament, we see Jesus fervently praying in another Garden, “Father, I desire that they also whom You gave Me may be with Me where I am, that they may behold My glory which You have given Me; for You loved Me before the foundation of the world.” (John 17:24).

Paul illuminates the story even better, stating in Ephesians 1:3-6:

Blessed be the God and Father of our Lord Jesus Christ, who has blessed us with every spiritual blessing in the heavenly places in Christ, just as He chose us in Him before the foundation of the world, that we should be holy and without blame before Him in love, having predestined us to adoption as sons by Jesus Christ to Himself, according to the good pleasure of His will.

Peter brings us a fuller understanding, saying “He indeed was foreordained before the foundation of the world, but was manifest in these last times for you  who through Him believe in God, who raised Him from the dead and gave Him glory, so that your faith and hope are in God” ( 1 Peter 1:20, 21).

Yes, it was good. It was very good.

God, in love, chose, before the earth was even formed, the sky, the birds, or the fish, to adopt us as His kids by Jesus Christ’s blood, according to the good pleasure of His will!

Somewhere in eternity, Jesus and the Father chose, in love, to come down.

Before the darkness was separated unto light, before the breath of God entered Adam’s lungs, before that epic choice by Eve to choose Satan’s lies instead of God’s goodness, before the exclusion from Eden, before sin, Christ, the last Adam, the Lamb of God, the King and the Word, chose us.

Love has come down to us all.

Let’s pray:  O God, Elohim, our faithful God of Strength and our Creator, draw us close even as we worship You for your expansive love, Your incredible choice to love us before the foundation of this world!  Lord Jesus, what love You have shown, to choose to die for us before the world was even made, that we would have the grace to be with You for all eternity!  Sweet Spirit illuminate our darkness this day with the light of revelation!  Give us wisdom to live bold in the love you have lavished upon us all as we embrace the truth of creation.  Amen.

6 thoughts on “In the Beginning, Love Came Down”